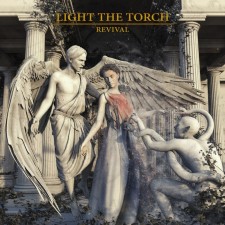 Devil You Know went through a bit of turmoil in 2016. Drummer John Sankey was heavily focussed on his Legion Festival following the collapse of the annual travelling Soundwave Festival in the hopes of giving Australian metal heads something else to look forward to. But I haven’t heard much on that front since. Next thing we know, John leaves Devil You Know and things turned ugly resulting in vocalist Howard Jones (ex-Killswitch Engage), guitarist Francesco Artusato (ex-All Shall Perish) along with bassist Ryan Wombacher of the now reactivated Bleeding Through having no drummer and eventually no band name.

Due to legal reasons and part copyright claims from Sankey, the band was forced to change their name and in mid 2017 they re-announced themselves as Light the Torch. Not exactly a name that is going to set the world on fire. I suppose you could look at it as some what relevant though such as lighting the torch on a new chapter in the band’s career and making it through the storm. With the new name comes a new album plus what is also a blatant and obvious intention; a new sound. Technically this is their third record, once again released via Nuclear Blast Entertainment, the aptly titled Revival.

I was pretty fond of Devil You Know’s sophomore effort, 2015’s They Bleed Red at the time, especially with how swiftly they followed up their 2014 debut The Beauty of Destruction. But I must admit the former hasn’t seen much action since. Upon the initial listen to Revival, opener “Die Alone” does not exactly kick the door in like one might expect or hope from this release and is the complete opposite to the openers of the aforementioned records. I immediately had two questions. Where are the screams? Where are the solos? Then more questions began to follow. Where is the double bass and blast beats? Where is the metal?

New drummer Mike “Scuzz” Sciulara (Extinction A.D.) is tight but as the album progresses its clear he does not get much of an opportunity to let loose due to the more streamlined and simplified music that Francesco has written. Any comparisons to the physical and technical prowess of the departed John Sankey are pointless. “The Sound of Violence” is the only song that contains all heavy screamed vocals and is probably the heaviest song that Revival has to offer. I was obviously quite negative with my initial response and overall reaction to this record due to the severe lack of screaming and heaviness and thought I might just shelve this one.

But, as they say, persistence pays off and persist I did to somewhat satisfactory results. The more I listened, the more I discovered some great songs in “The God I Deserve” and “Calm Before the Storm”, both of which contain stellar vocals from Howard. In fact, Revival as it stands probably contains Howard’s greatest melodic vocal performance to date with plenty of support from Ryan. Francesco’s been referred to as a shredder and virtuoso at times but it is abundantly clear that the objective with Revival and of Light the Torch themselves, was to make a record full of songs dripping with melodies, hooks, grooves and a more commercial and accessible focus. No doubt some fans will be put off and take their leave, but I am sure many new ones will take their place.