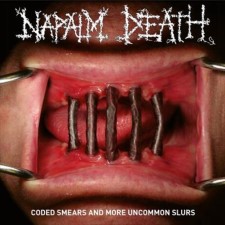 I think if I had to describe Napalm Death to someone, I’d describe them as a loaded freight train with 2 speeds – fast, and fastest. There truly seems to be no stopping for these guys. Since forming in the very early ‘80’s in a form that is unrecognisable these days, Napalm Death just keep going from strength to strength with absolutely no hint of slowing down, let alone stopping completely. Their most recent studio effort, Apex Predator – Easy Meat was easily one of the best releases of 2015. It was one in a string of many consistently sensational albums the band have been churning out with regularly over the years.

Whilst they are busy working on studio album number 16 and non-stop touring, the band have compiled a two CD set of bonus tracks, rarities and one-off recordings and unleashed it on their fans under the moniker Coded Smears and More Uncommon Slurs. This collection clocks up just over 90 minutes through a total of 31 songs spanning “The Century Media Years” (aka 2004-2016). Now, we’ve already had the Earache Records compilation, 2003’s Noise for Music’s Sake which covered up to 1998’s Words from the Exit Wound, even though half was a “best of” and the other half contained a handful of rarities. The purest of fans would like to see more complete collections of rarities from that era as well as the Dreamcatcher/Spitfire Music years in between as well. We can only hope.

There’s rare material here from no less than five Napalm Death studio albums – in fact 17 tracks in total come from the recording sessions of The Code is Red…Long Live the Code through to Apex Predator – Easy Meat. There are some choice cuts in here – some are covers, but most are originals. Alongside those are one off original and cover songs and a handful tracks from split releases. It’s pretty fair to say that Coded Smears… leaves no stone unturned as far as the last dozen years of Napalm’s recorded output goes.

As much as this comprehensive collection fills the gap between albums for the band whilst they continue to tour the globe relentlessly, it does feel like a compilation. It doesn’t quite have the flow of a studio album, if that makes sense. It’s kind of hard to put my finger on it. It’s sonically consistent thanks to the band once again engaging long-time producer Russ Russell, who has been instrumental in the band’s charge in the post-Earache years.

I’ve little doubt that this collection will satisfy the needs of Napalm Death fans who just needs to hear new Napalm tracks. It’ll certainly keep their worlds turning until the next full length album drops. Grind on!