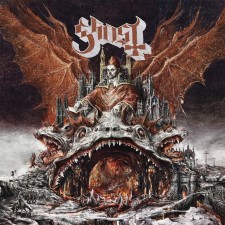 Ghost is a band that divides the metal community. Love ‘em or hate ‘em, whatever they do manages to stir up both parties. Since the release of the band’s excellent third long player Meliora almost three years ago, they’ve unleased a fantastic filler EP dubbed Popestar, a live album less than 12 months ago titled Ceremony and Devotion, toured the globe (except Australia), been embroiled in a legal case between ex-band members and founder, mastermind and frontman Tobias Forge, and several band members past and present have been unmasked due to the fallout from the aforementioned legal stoush.

Oh and to top it all off, Papa Emeritus III has been replaced by Cardinal Copia. It is this point in the band’s visual evolution that also marks a new era in the band’s sound as well. Ironically, whilst the band’s sound has slowly progressed on from the darker, occult rock sound of the band’s earlier works to a more straight ahead rock vibe, the album’s artwork has more in common with ‘80’s and ‘90’s thrash and death metal bands than anything you may expect from Ghost. Perhaps that’s the beauty of Ghost – the fact that the first album and those early live shows laid a solid foundation for and of the band, but it was their subsequent albums that showed the world that you can forget what you think know about Ghost. Expect the unexpected. Prequelle, which is pronounced “pre-KWELL” (according to the bio accompanying the promo), also fits that mould.

Opening with “Ashes”, the first of three instrumental numbers, the album only really takes off when the now very familiar and insanely infectious “Rats” kicks in with its bouncy rhythm and killer riffs. It’s a sensational lead single and one which carries the torch from anything on Meliora with ease. It’s also the song that really brings to fruition Forge’s vision of 70’s and ‘80’s hard rock and AOR. There’s no doubt that Ghost have had some incredible songs over the course of their three studio long players but “Rats” is the bridge between Ghost’s past and their future. Everything about Ghost and this album in particular begins to align starting with this one rockin’ track that has all of the hallmarks of classic arena rock.

The first half of the album is stacked with well crafted, infectious songs that we all know Ghost can deliver. “Faith” has an unescapable Infestissmmam feel to it whilst “See the Light” aligns itself more with Meliora. The run to the album’s finale begins with the second single, “Dance Macabre”. This is easily the most accessible song Forge has penned to date. With its disco driven rhythm, and a truly classic and memorable chorus which includes plenty of open singalong parts, this song is the sign that Ghost will be bigger than they ever could have imagined. Then again, maybe that was their grand plan when they were writing the Opus Eponymous demos 2010. However, for all of the arena oriented hit singles on here, both the second instrumental number “Miasma” and “Pro Memoria” certainly return to a darker sound ala Infestissumam. It’s certainly an interesting pair of book ends wrapped around “Dance Macabre” and feels familiar and comforting for those who prefer the darker sounding side of the band.

Prequelle is clearly Ghost’s most mainstream album to date which makes the decision to include three instrumental numbers even more confusing especially when the final round is the lifeless, “Helvetesfonster”. Its omission would have made the sombre “Life Eternal” a much stronger finale.

This album took many spins for me to digest. “Rats” set a very high watermark for the rest of the album when it was released as a teaser weeks before the album dropped. However, upon hearing the final product, I found myself struggling with it at times. The highs were incredibly high, but the lows, including the excessive instrumentals in particular certainly disrupted my enjoyment of this one. I still prefer the darker, more sinister sound that oozed from their earlier efforts but there’s no doubt that Prequelle is onwards and upwards for Tobias Forge and his Nameless Ghouls. This one falls a little short of their last two albums, but there’s plenty of good stuff on here.