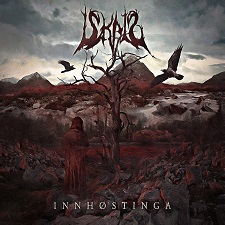 By just about any rationale I can summon, I should be all over Norway’s Iskald and their blend of thrashy, melodic black metal, but the reality has proven to be a little more complicated than that.

My introduction to the band came by way of their third album, The Sun I Carried Alone, from 2011. I had quite a bit of fun with that release at the time because it managed to strike a satisfying balance between the two prongs of Iskald’s sound while also offering up a heap of catchy hooks. 2014’s Nedom og Nord was a bit of a letdown for me, though, because the mix of the components felt off and because Iskald had focussed on delivering fewer songs with greater running times, leading to an overriding perception that the album meandered a bit too much.

After a four-year wait, Iskald are back with album number five, Innhøstinga, and just like I mentioned at the beginning of this review, things are complicated this time around, too.

Innhøstinga’s greatest strength is how riff-heavy it is, with each of its nine songs offering up a variety of different ideas. In theory this is an approach to song-writing that really speaks to me, but in practice here it has proven to be more a weakness than a strength. On the positive side of this equation, if a given riff isn't to your liking, you won't have to wait long at all for something else to come along to replace it. Conversely, though, the final result more often than not tends to be that it's very hard for any high points in a song to surface and shine because they’re dispensed with so quickly. Iskald clearly had a lot that they wanted to say with this release, but the message gets buried beneath the weight of the delivery, and that’s a shame because when one of those stronger riffs does manage to surface, it’s demonstrative of the skill lurking within Iskald’s ranks.

With a running time of over 50-minutes, Innhøstinga could have benefited greatly from some tighter editing. During the album’s back half there are two songs (“From Traitor to Beast” and “Lysene som Forsvant”) that both have an air of finality to them - prime candidates for closing out an album, I would think - and in both cases they do no such thing. In the three or so weeks that I’ve been listening to the album, my heart always sinks a little when one of these tracks finishes and I’m reminded that there’s more to come. It’s not so much a reflection on the quality of the songs themselves, mind, but more a suspicion that Iskald just didn’t know how to finish the album and ended up with a bloated and narratively muddled second half.

Much like Nedom og Nord before it, Innhøstinga isn’t a bad album, but it’s also not one that I have much interest in revisiting in the future either. I have little doubt that Iskald has it within them to turn out a great album, because both members are clearly quite talented, so with any luck one day they’ll use that talent to write the kind of focussed, hooky, and melodic black metal that I want to hear.