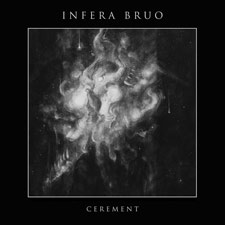 I will admit that what initially drew my attention to this release was learning of the link to Trap Them (also signed to Prosthetic Records) through the band’s bassist, Galen Baudhuin. He is Infera Bruo’s vocalist and guitarist and he also produced Cerement. I was very bleak to hear that Trap Them has called it a day and perhaps Infera Bruo is now Baudhuin’ focus. Cerement is the band's third full-length studio album and first with Prosthetic Records - one would imagine due to the aforementioned link. Infera Bruo (Esperanto for "infectious/hellish noise”I however, is a very different animal to that of Trap Them.

We are dealing with black metal, but of a more sensory kind. I would not go as far as to say there are folk elements to their sound, nor that Infera Bruo is prominently progressive, but rather more along the lines of a band that's focussed on sticking close to the raw and unpolished. Use of synthesisers and effects play the role, at least in the feature tracks, of an atmospheric backdrop. Riffs are very much front and centre with Baudhuin’s growls canvassing the murky landscape.

Following an acoustic-dominated opening in "Poison Waters", jagged electric riffs kick in with steady drum blasts as "Shroud Enigma" rolls in. There is no breath drawn in the seven-minute track, despite the inclusion of spacey electronics and tempo shifts. It’s an enveloping sound and quite expansive with its sinister and moody presence. "Effigy of Reason" is another acoustic interlude before "Endnotes" sidles up with a gentle start only to gather menacing momentum and reveal some rather neat guitar interplay. "The Lunar Pass" introduces more melody and a closer look at the more 'epic', storytelling side of this band. It’s again a longer track but there is no filler and the central melodic chord is very memorable. "Draped in Sky" is a trippy, winding track that incorporates more electronic effects to supplement docile instrumental passages. Its better moments are in the final couple of minutes before making way for "Scorne". This is an explosive, black metal gem with the twisted harmonies and devilish rhythm. "Temporal" closes out the album in a haze of acoustic guitar and samples.

Fans of black metal of the more visceral and thought provoking style should enjoy what Infera Bruo has created here. Cerement is by no means easy listening, so a few spins of this album are required before firming up an opinion.