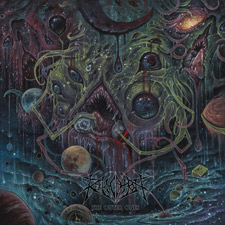 Full-length studio album number seven from Boston, Massachusetts’ Revocation is a significant one. Its release coincides with the band’s career at a juncture in its trajectory. That perhaps sounds too dramatic, but Revocation has, in the past ten years, risen to levels of fame that inevitably attract the amount of attention that sprouts moments of scrutiny. There has been plenty of prodding and poking at subjects like musical style, subject matter, heaviness, and vocals. 2013’s self-titled album was arguably Revocation’s real breakthrough moment and it also marked the band’s signing with Metal Blade Records and moving away from Relapse Records. The band seemingly took it all in its stride and later unleashed Deathless in 2014, which was a stunner. Creative, complex song-writing was complemented by riff upon riff and a whole heap of hooks.

Up until this point it really seemed that Revocation could do no wrong. David Davidson and co were simply setting very high standards, and so it was with 2016’s Great Is Our Sin that the end-product didn’t quite measure up. It certainly wasn’t a bad album by any means, but it just wasn’t as memorable as what had come before it. Interestingly, Great Is Our Sin was also the first album not to include their original band logo in the artwork (Deathless didn’t include any display of the band or album name on it at all). So the whole album just left many asking where the band was headed with this release. True to form, Revocation were back two years later with more music and the album to obliterate any doubts.

Davidson talks about making a point of not losing that edge with writing death metal of a more progressive type. I think that's what happened to a degree in Great Is Our Sin and what makes the band's new album so very impressive because they executed their intentions with brutal authority and a ruthless dose of ‘edge’. The Outer Ones is bloody heavy and is Revocation at a level of death metal never heard before. The song-writing is sumptuously complex and catchy, so it's the Revocation fans know and love but, more importantly, the album sounds like a complete and tight end-product. Davidson went with a sci-fi horror theme and the music vividly paints an image of a cosmic universe flooded by evil and chaos. Again, the level of execution is superb.

"Of Unworldly Origin" is a breathless opener and sets things up very nicely for what’s to follow. "That Which Consumes All Things" and "Fathomless Catacombs" reveal an air of accentuated distortion mixed in with a very sinister sound courtesy of a blanket of technical heaviness. These are epic numbers and ones to certainly file away in Revocation’s ever-developing repertoire. The title track, like "Of Unworldly Origin", is tireless in its speed and tempo and also shows off the band’s ultra-tight musicianship. Davidson’s vocals are impressive as always, but there is a clear step up as he sends home the added aggression and bouts of death metal growls. He takes a break though on the instrumental “Ex Nihilo” which is a great number and shines the spotlight on each of the four band members. "Luciferous" is a stand-out track for me. It is brilliantly balanced with elements of evil, melody and groove. It’s a seriously dark and menacing song which goes down a treat (and listen out for Brett Bamberger’s solo on bass about two-thirds the way through). At just over seven minutes, “A Starless Darkness” closes out the album. Things slow down here quite a bit, but it doesn’t feel like a shift away from the rest of the album nor the spacey, otherworldly theme of terror and despair.

Revocation hardly puts a foot wrong in The Outer Ones. This is as good as it gets when it comes to coming back from a prior disappointment. Revocation continues on its warpath of progressive, technical death metal.