As the Kingdom Drowns 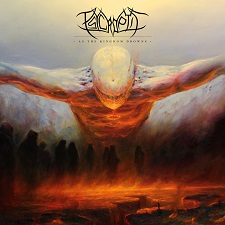 Psycroptic are swiftly approaching their 20th anniversary. In that time they’ve consistently proven they run a relatively tight ship, with six full length records under their belt and only a couple of line-up changes. The most significant in 2004 when touring vocalist Jason Peppiatt joined the band permanently to replace original vocalist Matthew Chalk whom appeared on the band’s first two records. That’s a pretty solid and commendable effort for any band in this day and age, not to mention an Australian technical death metal band from Hobart, Tasmania.

To say they’ve never looked back is an understatement and now their seventh full length is upon us in the form of As the Kingdom Drowns, out on Prosthetic Records / EVP Recordings, and god damn, does it deliver. Opening with “We Were the Keepers” is simply hands down the right move, with one of the most spine-tingling and catchy as hell death metal choruses I have ever heard. The use of the angelic female choir vocals that gradually increases into its chorus as it’s repeated is a bold move, creating an almost symphonic vibe but it works on so many levels and feels like we’re welcoming the end of life on earth as we know it.

The female vocals are so successful they’re employed on the title track, with its peaks and valleys of technical organised chaos and also the intense “Beyond the Black” that at 2:36 brings to mind early to mid Lamb of God. “Deadlands” is a more straight up thrash and groove metal number with a sheer ripping solo from guitarist Joe Haley. In fact, Joe is all over this record. The riffing is on point and definitely focussed more on the metal than the technical death metal wizardry, although the latter is still prevalent at almost every turn.

Around those turns is Joe’s brother, drummer Dave Haley, blasting and grooving along ever so tightly. A welcome reprieve comes in the form of “Upon These Stones” with its introduction of almost Eastern inflections of guitar and percussion and a spectacular percussive jam towards the end. It is these more groove-oriented and experimental, almost slightly progressive moments that I thoroughly enjoyed, and the female choir vocals are an absolute winner and I would definitely welcome them as common staples on future records.

The sound is clear yet raw and live sounding, once again produced by guitarist Joe Haley with the mixing and mastering handled by Will Putney, guitarist of Fit for an Autopsy, who also worked on recent releases from Pig Destroyer, Body Count, and Every Time I Die. The excellent artwork was created by Polish artist Mariusz Lewandowsky who created the incredible cover art on the most recent Bell Witch record.

It’s all over pretty quickly, with nine tracks in 35 minutes, but it’s simply all 100% killer, no filler, and try as hard as you can to not hit play again, good luck. As the Kingdom Drowns is an absolute riff fest of a record, catchy as hell and believe it or not, memorable. I don’t recall enjoying a Psycroptic record, let alone a technical death metal record as much as this in a very long time. Psycroptic have successfully evolved and managed to tread between sounding fresh, modern, and relevant while sticking true to their origins.