The Wings of War 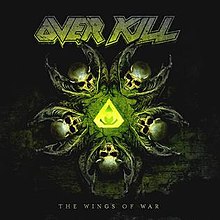 New Jersey’s finest thrashers Overkill are just about as regular as clockwork when it comes to album releases. After 2017’s excellent The Grinding Wheel, the band churned out their third live album Live in Overhausen to capture the band’s electric live performance deep into their career. But unlike opposite coasters Exodus and Testament, Overkill have never taken a break during their career. Sure they’ve had their share of lineup changes – even as recently as March 2017 when former Shadows Fall skinsman Jason Bittner took up residence behind the kit – however frontman Bobbi “Blitz” Elsworth and bassist D.D. Verni have been the staples within the band since their formation in 1980.

Since the band’s first release with 1985’s Feel the Fire, their latest The Wings of War marks the band’s nineteenth studio album. The opening track, the blistering “Last Man Standing”, builds for around a minute and launches into pure rhythmic, thrashing fury. It feels very much like an “intro and opening song” combination that will kick off their shows in support of this album and it’s sure to ignite mosh pits into a frenzy.  As you’d expect, the majority of any Overkill album is pedal to the metal material that barely gives you a chance to catch your breath. However, mid way through The Wings of War, the pairing of “Distortion” and “A Mother’s Prayer” that shakes things up a bit by bringing the pace down a few beats per minute for sure. Later on, “Where Few Dare to Walk” certainly unleashes a heavily bass driven groove that has a vibe kind of like like Megadeth’s “Five Magics”. There’s definitely a couple of welcome change ups which makes the lengthy, 50-odd minute run time more tolerable.

The one thing I can always count on with Overkill is the wall of sound they unleash. The riffs and power chords are crushing, D.D.’s bass appears with the same bright tone that we always associate with Overkill, the drums are hectic and Blitz’s unmistakeable wail rounds out the complete package.
Line-up changes aside, it’s clear very early on that Overkill haven’t skipped a beat. At this point in their career, and with the consistently high output over the years, The Wings of War is very much a meat and potatoes album from the quintet. That’s not calling it bad or anything like that. Overkill are far from going through the motions. Quite simply, The Wings of War is classic Overkill doing exactly what they have done for many years and this one is just as consistent as their previous outings and that is all fans can ask for.