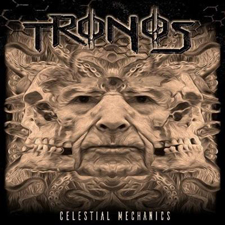 The enigmatic UK bassist Shane Embury is part of yet another new project. The Napalm Death man is already involved in the likes of Lock Up, Brujeria, Venomous Concept, and Born to Murder the World, and now he’s added Tronos (the Spanish for “thrones”) to his repertoire. Embury is joined by producer Russ Russell, who has worked with Napalm Death, and current Megadeth drummer Dirk Verbeuren (ex-Soilwork). And if these names alone don’t do enough to pique your interest, this album features appearances from bassists Billy Gould (Faith No More), Troy Sanders (Mastodon), and Dan Lilker (Nuclear Assault), along with guest vocals from Denis “Snake” Belanger (Voivod) and Erica Nockalls (The Wonder Stuff).

Name-dropping aside, Tronos is a very interesting heavy metal operation and one certainly due to attract plenty of attention. The combination of Embury, Russell, and Verbeuren results in a soundtrack to a world stripped to its skeleton by fire and human poison. The vocals and almost mechanical percussion sometimes remind me of a Ministry, but without that angular, industrial feel. The music is heavy, but also ponderous and cosmic. The synthesised elements courtesy of Russell are weighted excellently in the song writing, giving “Celestial Mechanics” a psychedelic overtone.

Verbeuren is certainly no slouch behind the kit and his contribution throughout the album is a mighty one. It’s interesting to read all the bassist guest appearances here, but so much of the essential work is already done with Embury’s song writing. Unlike at neck-breaking speed with a Napalm Death, the bass parts are threaded through the ominous melody and marching percussion with bold intent. The riffs are raw and textured, playing a big part in the industrial sound present on the album.

Both Embury and Russell contribute with vocals and the delivery actually serves at keeping the spotlight on the instrumental ingredients. There is a mix of longer and shorter tracks, tempos, and each song brings something different, but all the while all ten songs do work at making the album feel whole. I think this is mostly because of the band’s identity. Celestial Mechanics is forward-thinking and original, drawing from the members’ collective experience and importantly the desire to create a certain sound.

"Birth Womb" was the first single and it’s arguably one of the heavier songs, which as far first impressions go, makes for digesting the rest of the album that much more interesting. Things get quite trippy and textured - "Beyond the Stream of Consciousness" for instance - with the heaviness pulled back significantly. Mixing things up even more, Tronos’ cover of Black Sabbath’s 1978 "Johnny Blade" is very well executed. It is well worth giving the album a few listens and it needs to be absorbed in stages. The opening numbers, "Walk Among the Dead Things" and “Judas Cradle” are strong introductions to Tronos so set aside some time for this album - it’s well worth it.