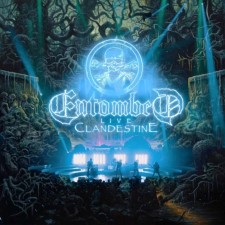 If there’s one thing that can be really cool for bands to do these days for their fans, it’s play an album in its entirety live in concert. For a few years now, it’s been a bit of a thing. All of “The Big 4” have done it as well as bands such as Godflesh, Soulfly and The Offspring. Swedeath metal pioneers Entombed joined those ranks in November 2016 when they performed their epic sophomore release, Clandestine, to celebrate the 25th anniversary of the release. Alongside original Entombed guitarists Alex Hellid and Uffe Cederland and original drummer Nicke Anderson, were vocalist Robert Andersson and bassist Edvin Aftonfalk to commemorate the occasion.

This album-in-concert event was a bit different to others we have seen in the past. The full event featured two acts of which the first was the Malmö Symphony Orchestra and Choir, which featured original Entombed members as a part of the ensemble, performing a special arrangement of the album’s songs by composer Thomas Von Wachenfeldt. It’s a shame that this very unique take on this classic album isn’t featured as a part of this release.

What we are left with, and I don’t mean that to sound negative, is act two – Entombed’s complete performance of Clandestine, a first in this album’s quarter century history. It’s an album that somewhat divides those Entombed fans who salivate over the band’s first two long players. Some prefer Left Hand Path and others Clandestine. I do lean towards the Left Hand Path side of that debate, but really, both are so good and so essential in the history of Swedish death metal, that really, it’s probably more of a case of why not both? Even the band agreed as they’ve included a live version of “Left Hand Path” as a part of this concert, too.

Quite simply, Clandestine sounds amazing. It gets the live album treatment it rightfully deserves. The performance is 100% on point. It’s note perfect across the board and the massive guitar tone that is not only the album’s signature, but that of the band as well from that era, is beautifully intact. There’s no banter, no audience interaction. This album is pure Entombed getting down to it and smashing it. At the time of recording, it was almost two decades since Hellid, Cederlund and Andersson had jammed on Entombed tracks, but this performance shows that they’ve lost nothing of the magic that they had many years before.

Probably one of the big talking points of Clandestine from the earlier years of the band’s career, is that it’s the only one not to feature vocalist L.G. Petrov, who was fired prior to recording the album. Whilst one time Carnage bassist Johnny Dordevic was credited as the band’s vocalist on the actual release, it was in fact drummer Nicke Andersson who fulfilled vocalist duties on the album. After listening to this blistering rendition of the entire album, I’m sure fans will agree that vocalist Robert Andersson is no slouch, either. He absolutely nails it.

A release like this is really for the diehard fans. In fact, that’s true of any live album I think. However, if you love Entombed and Clandestine is your favourite release of theirs ever, then Clandestine - Live is an essential addition to your collection.