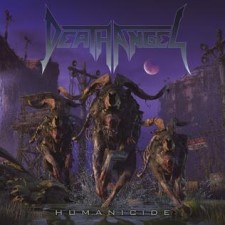 There’s a lot of bands from the old guard who are thriving in today’s diverse and often challenging metal landscape. Since reforming in 2001 for the Thrash of the Titans benefit for both Testament vocalist Chuck Billy and Death vocalist/guitarist Chuck Schuldiner (who were both battling cancer at the time), San Francisco Bay Area’s Death Angel hit the ground running with 2004’s outstanding return, The Art of Dying. Since that point, they have not looked back playing countless shows around the globe in clubs and on festivals, and effortlessly dropping another four killer albums along the way. It’s quite a lengthy run second time around and the band are continuing to deliver the goods with their latest album titled Humanicide.

The opening intro to the title track which kicks off studio album number nine for the quintet is a clear statement of intent that is backed 100% by the blistering fury of riffs that follows. It’s undeniably clear that guitarist Rob Cavestany writes some of the best thrash riffs around these days and he has quite the knack for song construction. Take a look at the vibrant “Aggressor” which features a punchy, full speed chorus, thrust in the midst of flowing acoustic and electric arpeggios that undeniably ooze dynamics with added help from drummer Will Carroll’s skills behind the kit. It could easily fit on the band’s much heralded classic release from 1990, Act III. It’s followed on smoothly by a sure to be pit classic in I Came For Blood, which throws right back to the punk roots associated with thrash, unleashing an massive amount of energy which is sure to ignite any crowd into a moshing frenzy.

The diversity on display musically across the ten tracks offered up by these Bay Area thrashers is brilliantly matched by the group’s incredible front man, Mark Osegueda. It doesn’t matter if this group plays to a club of 200 people or a festival sized audience, these guys deliver on every level and that is absolutely true of Osegueda both on stage and in the studio. Humanicide is no different as Osegueda effortlessly wails and barks as one not only thrash’s, but metal’s most identifiable and lively vocalists.

The only real criticism I have of Humanicide is “Revelation Song”. It’s not just the pedestrian pace that works against it, either. Musically, it meanders aimlessly with bland power chords behind the chorus and really feels every single bit of its five and a half minute duration and then some. Death Angel have shown they can deliver on the slower material in the past – “A Room with a View”, “The Devil Incarnate” and the outstanding “Buried Alive”. They fell short of the mark with “Revelation Song” and Humanicide overall would be faultless if this one didn’t make the cut.

That particular misstep aside, without doubt Death Angel have unleashed an utter balltearer of an album as they deliver yet another crushing collection of thrash anthems that matches or betters the calibre of their releases across the last decade and a half. Death Angel fans are in for a treat with this one and it will sit very well with thrash fans in general, too.