One Life One Sentence 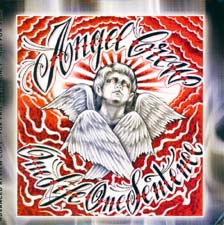 One angry mixture of metal and hardcore

Originally starting life out as a side project that featured members of Length Of Time, Deviate, Backfire!, Downshot and Down But Not Out, Angel Crew's 2001 release Another Day Living In Hatred was only a taste of things to come. But it wouldn't be until Deviate disbanded and Backfire! and Length Of Time went on hiatus' that any kind of return would eventuate. The planets aligned and so it was written that vocalists Danny Belmont (ex-Deviate) and Pat Koenen (Backfire!), guitarists Ross Van Geel (Length Of Time) and Dave Moore (Downshot, Code Red), bassist Chris Dox (Down But Not Out, Backstabbers BXL) and drummer Igor Wouters (Backfire!) would return with their highly anticipated sophomore effort One Life One Sentence.

The aggression and fury that Life Sentence immediately pounds you with is strongly backed by the venomous lyrics within. If the opening few seconds of Angel Crew's latest album don't give you any indication of what they're all about, then nothing will. Break Through switches between more fast paced hardcore brutality and a memorable, semi-melodic sing along chorus before it unexpectedly ends and the raw power of Spit It Out unloads in the vein of Hatebreed and to a lesser extent Merauder. The Madball like melodies are brought closer to the surface throughout the brilliant Bring Down The World and the harder Carry On The War is sure to appeal to diehard Hatebreed fans and even the more rock metal oriented fans particularly with the breakdown around the 1'50” mark.

Dead End Sin and to a lesser extent Cross The Line are sure to whip any mosh pit into a chaotic frenzy with their sheer pace compared to the plodding, more melodic Chapter Of Violence. Another King Down is another one for Hatebreed fans as it varies the tempo throughout as is the weaker and less exciting Shut Them Down. Running at a little under seven minutes, the closing track Life Of An Angel almost is a case of saving the best to last as it explores a less aggressive yet darker and moodier side of Angel Crew's musical diversity.

There's nothing overly original to Angel Crew's One Life Once Sentence but there's enough here to make it worth a listen. If you have any kind of interest in the likes of Hatebreed, Madball and Merauder, then you'd be well rewarded for checking this one out as well.