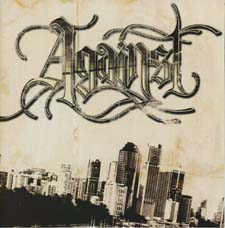 Standing along side the likes of Parkway Drive and In Name And Blood, Brisbane's (AUS) Against are doing their part for bringing the Australian hardcore scene to a larger crowd. Since vocalist Greg Appleby formed the band in late 2001, Against have made a name for themselves with a strong following on the back of their EP My Hate My Choice and landing support slots for the likes of Cro-Mags, Terror and BoySetsFire. After a few line-up changes along the way, Against (who are now vocalist Appleby, new guitarists Dave (ex-Stronger Than Hate) and Andy (ex-From These Wounds), bassist Gareth and drummer Brett) have finally delivered their long awaited debut full length in Left For Dead.

After some crowd noise and brief fade in, Quit While You're Ahead delivers a traditional barrage of hardcore speed and breakdowns before finishes with a sample from the movie Chopper with Mark "Chopper" Read (played by Eric Bana) talking about Aussies and our "tall poppy syndrome". Both Loyal To My Own and Left For Dead are characterised by stomping openings with the latter being the first of many tracks to feature guest appearances and the only track to feature a double in guest vocals from Rhys Watts (XWish For WingsX) and guitars Vinny Steel (Mourning Tide, ex-Against). In true hardcore fashion, Force My Own (featuring guest vocals from Just Say Go's Allen Reid) and later on The Contender, unleash a barrage of unrepentant fury whilst We Built This features a guest appearance by vocalist Matt Maunder (Mindsnare) and a very out of place guitar lead break at the get go.

Showing a hint of metal influences are the semi Biohazard like opening riffs of Open Book before it becomes an onslaught of speed and the slowest track overall in For The True (featuring Mourning Tide's Tyrone Ross on guest vocals) which exhibits the strongest metal vibe (think Hatebreed style) throughout sans Appleby's vocals. Stand With A Fist relies on pace for the first half before switching to an assault of driving riffs before formulaic Bond Still Strong unsuccessfully attempts to avoid being nothing special. Rounding out this 26 minute blast are Taking No More (the last to feature guest vocals in the form of Simon Boyles (Neck Up/Live Today)) and We Don't Need you, both of which are laced with gang vocals through out in true hardcore style.

Against have delivered a solid album full of quality hardcore anthems that will certainly whip the pit into a frenzy with Left For Dead. With the exception of the somewhat annoying bass tone, the production adds plenty of weight to an already hefty collection of riffs and tempos making this a fine example of local and Australian hardcore that can easily stand up next to their international peers.