From The Depths Of Time 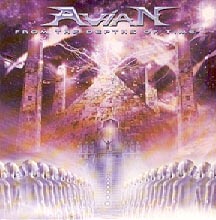 Fails to live up to the potential of the artists involved

Avian is the a new project founded by the relatively unknown Atlanta (U.S.) based guitarist/song writer Yan Leviathan, with From The Depths Of Time their highly anticipated debut. While some would suggest that the use of the word anticipated might be a little over the top for what is otherwise an unknown act, it's actually the musicians that surround Leviathan that has more than a few people expecting big things here. Comprising of vocalist Lance King (Ex-Balance Of Power, and currently in Pyramaze and a host of other side projects), lead guitarist Roger Moore (Ex-Gemini/Cains Alibi), bassist David Ellefson (Ex-Megadeth, and currently in F5), keyboardist Jonah Weingarten (Pyramaze/Lilitu) and drummer David Small (F5), Avian could easily be considered an all star cast of sorts, with plenty of expectations placed upon them to conjure up something special.

As with any project King is involved in, Avian is primarily a power metal based act, which at times could be compared musically to Savatage for the most part, while having King on vocals means that it also bears a slight resemblance to some of the acts he too has fronted throughout his career, although he tends to use his middle range here rather than his higher end abilities with Pyramaze. Perhaps not the strongest of starts, the album begins with the rather pointless instrumental Through The Past And Into Forever before finally allowing As The World Burns to get underway. The mid paced track is spearheaded by some solid riffing from Leviathan, while King puts in an equally impressive vocal effort along with a memorable chorus, but while it all points toward a positive, there's also a negative here too, as the track also represents the single stand out moment on the album, with the remainder drifting into the unremarkable.

There's no denying that Avian have the makings of an impressive group with their stellar line up, but almost every member is virtually wasted when just about every track is purely unmemorable due to the unadventurous material they've been given to work with from Leviathan. Not everything is a complete failure, as track such as Black Masquerade, The Fear, Blinding Force (One of the few tracks on the album that utilises a little bit of speed) and the ballad like Time Is All We Need all have their moments, but it's just not enough to push the songs into something truly special. Avian have crafted an album that should by rights be amazing, but it falls well short of the mark. I can only hope that next time around Leviathan might come up with some stronger material and finally deliver the goods.