From Mars To Sirius 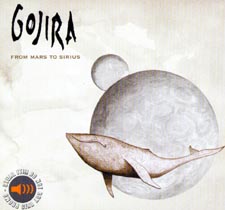 French (Bayonne) quartet, Gojira (who are vocalist/guitarist Joe Duplantier, guitarist Christian Andreu, bassist Jean-Michel Labadie and drummer Mario Duplantier), started life under the moniker Godzilla in 1996 before they changed their name due to legal reasons. Taking on the Japanese translation of their original name, the group released their first barrage of environmentally conscious metal in 2001's Terror Incognita. They followed it up with 2003's The Link which was later remixed and reissued globally two years later on their new label, Listenable Records only months prior to the release of their much anticipated follow-up, From Mars To Sirius.

The dynamics and the textures of opening track, Ocean Planet, and the subsequent chugging verses and dive bomb guitar notes of Backbone, are ripe with traits of Morbid Angel's Domination material including not only the riffs themselves, but also the guitar bends, dives and effects. Continuing the strength of the opening cuts is the double kick driven From The Sky which features more guitar effects and tempo changes as vocalist Joe Duplantier starts to explore some variations on his style. Offering some breathing space and diversity is the slow, floating instrumental, Unicorn, which makes use of subtle effects throughout before the epic dirge of Where Dragons Dwell returns with a myriad of textures and styles that fall in and out of death metal's graces.

The Heaviest Matter Of The Universe mixes death metal growls and clean vocals amongst aggression and melody and is an obvious extension of the material on their previous album The Link. Flying Whales is a schizophrenic monster of a track complete with whale-like effects throughout but it takes almost two and a half minutes before track's personality switches to a wall of distortion backed by a double kick assault as it moves more towards death middle midway before reprising some of its melodic intro towards the end. In The Wilderness continues towards death metal before World To Come shows the band returning more towards The Link material with it's ringing textured guitars. Soft guitars and clean, haunting vocals direct From Mars and its unexpectedly abrupt segue into To Sirius before the most melodic song of this release, Global Warming, wraps things up in a manner very different to the rest of the album with an abundance of clean vocals and melody.

The Link was a stunning album in many ways and it showcased a band that successfully blended several styles combined with their own unique twist. Gojira's return with From Mars To Sirius continues on from The Link and clearly takes it to the next level. Joe Duplantier's more varied vocal style may be the centre of discussion for some but within the context of the songs here, it works perfectly. This album is clearly an awesome achievement - a modern metal masterpiece - and one that will be difficult for these guys to top. But I for one will be waiting with much anticipation to see what they come up with next!