Till Death Unites Us 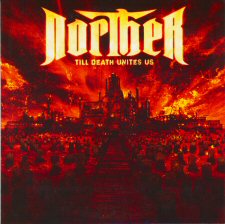 After forming in 1996 under the name of Requiem, it would be four years until Norther would come to fruition thanks to numerous line-up changes and several relocations of their rehearsal space. The band's first demo secured them a deal with Finland's Spinefarm Records before further line-up changes would plague the group. After the band's roster was once again restored to a five piece, things shifted into gear with their debut release Dreams Of Endless War surfaced in 2002. Instantly, the Children Of Bodom comparisons were made as the group delivered Mirror Of Madness (2003), and Dead Unlimited (2004) in quick succession. After the relative success of their third album, vocalist/guitarists Petri Lindroos and Kristian Ranta, keyboardist Tuomas Planman, bassist Jukka Koskinen and drummer Heikki Saari - drums have returned with their fourth album, titled Till Death Unites Us, after almost two years.

The album gets off to a solid start with the generally fast tempo of Throwing My Life Away which is full of catchy phrasings backed by keyboards that are recessed in the soundstage enough so that they add more of an atmospheric vibe to the track as opposed to being more up front and in your face. Drowning takes a little while to build and when it finally gets going, it stumbles somewhat thanks to its simple and generally unexciting riffs throughout, particularly compared to the continually driving and intricate guitar work that makes the band's self named track, Norther, stand out all the more. The slower pace of Everything feels like a bit of a non-event before the mixed bag of tempos that is Evil Ladies accentuates the tunes catchiness and overall feeling of being easy on the ear drums.

The soft piano lead intro to Omen and the clean vocals in the chorus sounds promising but its potential is never full realised compared to the later track Alone In The End which is delivers an enjoyable mix of speed and melody that features sprinklings of keyboards throughout that only enhance the strength of the song. Scream absolutely screams catchiness and melody through out, whilst the Spineshank sounding and lyrically blunt Fuck You and the straight forward Die really fall into the category of being average songs in the grand scheme of the album. Not to be confused with the classic Iron Maiden song of the same name, Wasted Years' predominantly unexciting slow pace is interrupted only by some tidy up tempo lead guitar work towards the latter stages before the driving pace of The End Of Our Lives feels more akin to what works for these Fins.

Norther has definitely made a shift into more melodic territory with their fourth studio album and at times, it's a hit and miss affair. Whilst there is enough standout tracks on here that will keep fans happy, some of less inspiring moments fall short of truly engaging the listener. For the most part, Till Death Unites Us works and it works well, but there are definitely a couple of rough patches along the way.