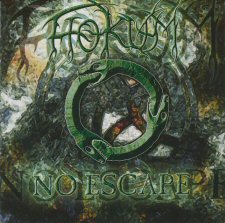 No escaping the quality of this EP

Going on almost six years since forming back in 2000, Germany's Hokum are still the same four guys who came together back then - vocalist/guitarist Benjamin Geppert, lead guitarist Michael Vogl, bassist Jonas Fischer and drummer Peter Reiter. It wouldn't be until 2003 that the band debuted on the Munich live scene and things have gone from strength to strength since then with festival appearances and the release of their debut EP First Blood in 2005. Not even 12 months on, and they are quick to continue to build on the momentum gathered from the positive reception that First Blood received as they unleash the next wave in the form of their second EP, No Escape.

Hokum kick things off with the furiously alternate picked death metal riff of Manticore that shows off some thrash overtones although merely a few seconds later, Geppert's death metal growl kicks in and you get a better feel for the direction that Hokum are heading. The song's tempo changes make room for a brief yet effective guitar lead before the song builds again through some tidy harmony guitar runs. Although the fast and frantic pace from the start of Silent Assassin is the song's staple, the continual mix of tempos throughout keeps the track interesting with its highlight clearly being the blisteringly fitting lead break towards the latter stages.

Taking things down somewhat of a slower path is the bass driven Face The End which features plenty of guitar intricacies that lace the track in and around Geppert's vocals. It's quite the contrast to the generally unexciting The God Within which doesn't register on the “interesting scale” until the second half guitar fest takes over as it unleashes a flood of riffs, runs and leads. The remainder of the EP is a two part sequel to Goats which appeared on Hokum's First Blood, not surprisingly called Goats Part II. The first part titled I. The Loving Father, is a slow, melodically and lyrically dark tale of incest whilst the final part II. The Beloved Ones continues the tale but with a more direct and brutal death thrash metallic edge throughout.

Intentional or not, there are some similarities between Hokum's sound and that of the some of the bands that appeared during the flourishing 80s and early 90s death metal scene. Still somewhat fresh sounding, there's a potential showing through with No Escape that clearly suggests that the best is yet to come. When great song writing and musicianship is assembled with solid production, the results speak for themselves, and Hokum's No Escape speaks volumes. These guys are worth keeping an eye on for the future!