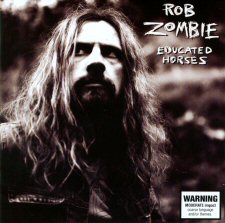 Some probably wondered if Rob Zombie's passionate focus on movies would ever see him return to the art form the made him a name to begin with. After all, it has been five years since the release of The Sinister Urge in which time Zombie produced two full length feature films in the form of 2003's House Of 1000 Corpses, and 2005's The Devil's Rejects. All questions regarding a new Zombie album have been answered as Zombie returns with ex-Marilyn Manson guitarist John 5 replacing long time guitarist Riggs along side his long-time partners in crime, bassist Blasko and drummer Tommy Clufetos. His third solo effort, titled Educated Horses, is clearly his most diverse to date, and if the title alone isn't enough to get the attentions of fans, then the surprises contained within are sure to get tongues wagging and minds ticking over.

The majestic yet sombre sounding intro, Sawdust In The Blood, has a big budget movie feel to it, almost as if you could see it being used in some kind of Hollywood production be it either Zombie's or otherwise. It doesn't get any simpler than the single riff that drives and dominates the mid paced American Witch and the typical heavy Zombie feel that it purveys. It's probably one of only a handful of tracks on Educated Horses that throwback to what fans would typically expect from a Rob Zombie song. Although the album's lead single Foxy Foxy begins with a sample laden feel of a White Zombie track, it soon reveals itself as the album's weakest spot. It's music for the masses by numbers and not the track that should be used as the benchmark for the remainder of the album.

Zombie continues to show a different side to what we've heard in the past with the catchy, Eastern influenced 17 Year Locust which features some effective Sitar work and the strong 70's influence along the lines of Alice Cooper and The Sweet that you simply cannot escape in The Scorpion Sleeps. The sub two minute instrumental 100 Ways really doesn't add to the album in any real way before Zombie returns to form with the hefty up beat pace of Let It All Bleed Out which isn't short of solid driving riffs. Neither of Death Of It All and The Devil's Rejects would be out of place in the background of a movie soundtrack as Rob Zombie continues branch out an wear his Alice Cooper influences on his sleeve. Ride offers up a something more akin to the likes of the Rob Zombie of old throughout it's contrasting shades of softer melodies with heavy riff driven passages, as does the album's finale, The Lords Of Salem, with it's slow dirge and heavy choruses.

Any hope of a return to the industrial metal style of White Zombie is truly extinguished by Rob Zombie's Educated Horses as it unashamedly moves on from those days and even those of his first two solo releases as well. Zombie ventures forth with a laid back album that wears its influences on its sleeve very clearly at times whilst still delivering on his original sound and style from time to time. It'll be a point of contention amongst fans but those that listen with an open mind won't be too surprised. Instead, they'll be rewarded.