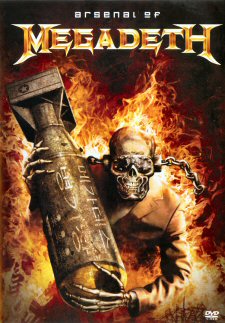 Outstanding collection of clips and bits

There's not a lot that needs to be said about Megadeth's history at this point that already hasn't been said. Or is there? Lead by outspoken guitarist, vocalist and founder Dave Mustaine, this one time thrash behemoth has undergone numerous line-up changes since it's inception in 1983 through to the present day with Mustaine himself remaining as the only constant. With only the briefest of pauses to their career hinging around Mustaine's hand injury which put the band's career in jeopardy in 2002, Megadeth have amassed quite the array of video clips and assorted footage during their career which has been assembled into the two DVD set titled Arsenal Of Megadeth. This two disc collection of video clips, rarities, interviews and promotional spots has been assembled under the close eye of Mega-man Dave Mustaine is the super deluxe video collector's edition equivalent of Megadeth's Capitol Punishment: The Megadeth Years which was released back in 2000.

The first disc covers up to and including 1992's Countdown To Extinction including video clips for Peace Sells...But Who's Buying?, Wake Up Dead, In My Darkest Hour (which is taken from the 1988 film The Decline Of The Western Civilization: Part 2, The Metal Years and is introduced by the films director Penelope Spheeris), Anarchy In The U.K. (the non-broadcast version sans the sound effects), No More Mr. Nice Guy (from the film Shocker), Holy Wars...The Punishment Due (the sanitised version which contains less war footage than the original version), Hangar 18 (which is the complete and unedited version), Go To Hell (from the film Bill And Ted's Bogus Journey), Symphony Of Destruction (the broadcast version and the alternate Trent Reznor/Nine Inch Nails Edited Gristle Mix), Skin O' My Teeth (recorded live in June 1992), High Speed Dirt (recorded live in September 1992), Foreclosure Of A Dream and Sweating Bullets. The DVD kicks off with a brief scene from Oliver Stone's 1988 film Talk Radio that segues appropriately into Peace Sells...But Who's Buying? and also features interviews from 1986 (with Mustaine, David Ellefson, Chris Poland and Gar Samuelson), 1988 (with Mustaine, Ellefson, Jeff Young and Chuck Behler), promo spots for Rust In Peace and Countdown To Extinction, rare live bootleg quality footage from 1990's Clash Of The Titans tour performing Rattlehead (from 1985's Killing Is My Business...And Business Is Good), an MTV Headbanger's Ball 1991 piece on Mustaine's first sky dive (titled Mission Megadeth), US election Rock The Vote promo clips and a 1992 interview documentary with Mustaine titled A Day In The Life Of Hollywood. The real gem is the hidden track (aka easter egg) that shows Marty Friedman's audition clip playing with Mustaine, Ellefson and Nick Menza on Wake Up Dead which can be accessed by pressing the Enter button on your remote control when the year 1990 appears on the screen.

The second disc completes the Capitol Records years from 1994's Youthanasia through to 1999's Risk before skipping forward to some live footage from 2005's inaugural Gigantour which Mustaine also assembled. Included along side film clips for Train Of Consequences, A Tout Le Monda, Reckoning Day, Trust, Almost Honest, A Secret Place and Insomnia are excerpts from 1994's Evolver home video (with interviews with Mustaine, Ellefson, Menza and Friedman), an interview with Menza discussing the controversy behind the album cover to Youthanasia, Mustaine explaining the meaning behind A Tout Le Monde, Cryptic TV interviews from 1998, Mustaine's appearance on The Drew Carey Show from 1998, both Mustaine and Menza talking about life on the road, and a rare 1998 interview from Argentina with Mustaine and Friedman, promo spots for Youthanasia, Cryptic Writings (titled Cryptic TV) and Risk and live versions of Reckoning Day (MTV's Night Of The Living Megadeth from Halloween 1994), Symphony Of Destruction (MTV's Most Wanted from 1995), Sweating Bullets and Peace Sells...But Who's Buying? (from Gigantour 2005). The two easter eggs on the final disc are excerpts of the making of the videos for Train Of Consequences and Trust, both of which are accessed by pressing the Enter button on your remote control when Vic's boney hand appears on the screen during their respective video clips.

There's little doubt that this two disc collection is impressive and almost exhaustive with an extensive assembly of video clips (both studio and live) being complimented with a mostly unseen collection of promo clips, interviews and the like. But this release is limited only to their Capitol Records years - even the Gigantour footage is of songs from that era - which means that anything from 2001's The World Needs A Hero and 2004's The System Has Failed didn't make the cut. Also missing are the soundtrack numbers Angry Again and Crush 'Em as they contain footage from The Last Action Hero and Universal Soldier II respectively. To some, these exclusions might be neither here nor there, but completists and diehard fans might be a little more frustrated by this. However, in the big picture of this massive two and a half hour collection, Arsenal Of Megadeth truly is as the title suggests and is a must for every Megadeth fan.