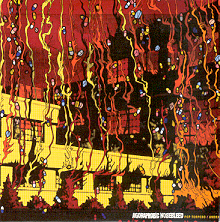 Classic revisted with a remix twist as a bonus

Within the grindcore scene, few acts match Massachusetts act Agoraphobic Nosebleed in terms of intensity or speed (With more than a little help from the use of a drum machine), which has seen the band's sound go beyond the scenes limitations, which has often been coined as cybergrind. While in the three years since the release of the band's last album (2003's Altered States Of America through Relapse Records), group founder/guitarist/drum programmer Scott Hull has kept himself busy (In the musical sense) with his other act Pig Destroyer, it hasn't meant a complete absence of activity within Agoraphobic Nosebleed entirely.

In 2005, Hull compiled an exhaustive collection of pre-Relapse Records (Up to 1998) material on a double album compilation Bestial Machinery (Discography Volume 1). Projected to appear around the same time was the re-release of their 1998 six-inch E.P. PCP Torpedo, but as fate would have it, the release was delayed. Twelve months later, and lo and behold, the long overdue re-release of PCP Torpedo is upon us, and it's safe to say that fans will attest that the wait has definitely been worth it.

Packaged as a double C.D., the first side houses the original ten tracks that made up PCP Torpedo, and from the opening sample by Richard Pryor (From 1978's Blue Collar) to Thanksgiving Day, the complete noise of the title track PCP Torpedo and Clorox Bong (Identity Picnic), the thick grooves of Thinning The Heard and Doubled Over to the sludge like tempo of Strong Stench Of Balance, Agoraphobic Nosebleed show absolutely no mercy throughout the grand total of seven chaotic minutes.

While the remix component will no doubt appeal to a certain number of fans, the actual release of PCP Torpedo on C.D. for the first time is more than a reward in itself.