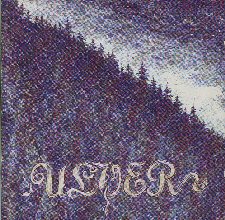 A monumental debut that continues to impress

The early to mid 90's saw the explosion of Norwegian black metal onto the metal scene. This isn't to suggest that the music popped up out of thin air. It had certainly been around for some time, but a handful of bands, through the release of a collection of outstanding albums, brought this scene out of almost complete obscurity into the hands of the wider metal community. Ulver, (meaning Wolf), were one of several of these bands who emerged during this period who approached the genre with a fresh and unique take on the myriad styles prevalent in this musical form. Their debut release comprises several of the popular black metal guises, melded into a varied and rich five track album.

As was often the case during this period, (and still is to some extent), folk music was heavily referenced and integrated into the band's overall sound. In Ulver's case, it was used both as an accompaniment to the metal sound, and also used in its own right as individual pieces and as interludes and bridges. The two distinct sounds counterpoint each other seamlessly, with each gaining its own exclusive treatment on Ulver's next two releases, the acoustic, folk inspired Kveldssanger, and the raw and unrelenting Nattens Madrigal (The Madrigral of the Night).

It wasn't just the melding of folk music and metal that made this album a true black metal masterpiece. Many other elements contributed in their own way, with perhaps the largest contributor being the eerie and withdrawn atmosphere. It imparts an almost calming feel to the listener, which is very unusual for a black metal album from any period. It serves as a bridge of its own between the subtlety of the folk music and the harshness of the metal.

The standout performance on the album would have to be that of vocalist Garm whose name would be familiar to practically any fan of black metal due to his contributions not only to Ulver, but also to Arcturus and Borknager and about a dozen other bands over the years. His repertoire ranges from clean sung vocals to black metal rasps to Gregorian inspired chants, all performed flawlessly, demonstrating his dominance even in this early period. Also worthy of note is that the production on this album is very, very good. It rests somewhere between the muffled, unintelligible sounds of raw black metal and the cleaner more clinical sounds of many popular big name black metal bands of today.

The compositions on Bergtatt were simply years ahead of their time. It is this intuitive nature that have allowed Ulver to survive in the often fickle black metal scene. Although in fairness, the Ulver of today is nothing like the Ulver of 12 years ago. Ulver haven't done a black metal album in the traditional sense since 1997's Nattens Madrigal. They have reduced their ranks to three members, and have ventured into the realms of electronica and experimentation. Whilst many wouldn't have necessarily seen the move into electronica coming, it was obvious almost from the very beginning that Ulver were never going to be a static band content to dip into the same inspirational well more than once.

They are a band that have undoubtedly lost fans during their many musical transitions, but those fans that have stuck around have been treated to several albums and EPs that always push the boundaries in ever varying directions.

(Head Not Found / Voices of Wonder)