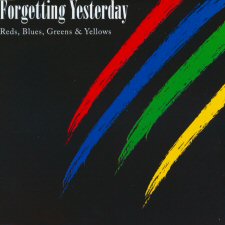 Following up the debut EP, 2005's The Obsession Will Kill Us All, New South Wales central coast quintet Forgetting Yesterday have returned with a double A side single titled Reds, Blues, Greens And Yellows. The group, who are vocalist Laurie Fouracre, guitarists Liam Shearer and Pete Cutrupi, bassist Ben Wright and drummer Nathan Pace, have churned out two new tracks along side to two variations on a theme of one of their own songs and an interesting cover as well.

The big rock sound which ever so slightly verges on emo sounding at times returns with the opening cut, Reds & Blues, which is the first of the two A-sides of this single. Guitar lines dance around Fouracre's emotion filled vocals which at times show tinges of Linkin Park's Chester Bennington, particularly during the vocal delivery the wraps up the track. The second A-side, Greens & Yellows, is a slower, more melodic offering which shows a more emotive side to the band's output. Taking things to the other extreme of distorted guitar rock is the alternative, acoustic version of their own A Contrast In Controversy (which is the opening track to their previous EP). This polar opposite is completely stripped back and delicate sounding to its original form. Rounding out this release is their cover of Alanis Morissette's Forgiven (which originally appeared on her 1995 album Jagged Little Pill), which, whilst relatively true to the original, is an interesting listen, particularly Fouracre's vocals which deliver an eerily spot on take on Ms. Morissette's distinguishable vocal style.

After a strong start with their previous EP, Reds, Blues, Greens & Yellows generally follows suit and the band's sound and style that was previously established. But with only two new original tracks on offer, it would have been nice to see maybe one more new track on here (at the expense of either of the two final tracks). Still, this release continues the build up towards a future full length release that hopefully won't be too far away.