The Great Apostasy: A Conspiracy of Satanic Christianity 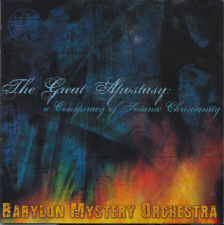 Babylon Mystery Orchestra is the vehicle by which sole member Sidney Allen Johnson (SAJ from now on) expresses his views on Christianity to the world. There's nothing unusual about that I hear you say. I mean this is a metal band isn't it? Well what is unusual about this gothic metal band is that it comprises only one member, and that member happens to be a Christian. I may have lost a few people with that last comment, but for those of you who stuck around, it was not in vain.

Whilst SAJ is a Christian, his views on his own religion are quite interesting and are what make up the concept in this concept album. To sum up exactly what this album is about is that basically the word of God is still the word of God, but that the church is as fallible as any human and can thus be corrupted (by Satan). Hence leading to priests that molest children, collecting tithe money from parishioners struggling to survive, and any other despicable act you can think of from the church's 2000 year history. He is certainly not telling anyone not to be a Christian, but rather to question the word of the church that is more often than not spouted as gospel.

What stands out in this album are SAJ's vocals which are clean sung, but are quite low and bassy, sounding somewhat like Type O Negative's vocalist Peter Steele. They are the driving force behind this album whose music, whilst still interesting and moody, can tend to drone on a little. This isn't to say that the music is boring in any way, it just repeats a little. In fact the music would be the perfect companion late at night due to its brooding and dark nature but may not be suited to casual listening.

Whilst I don't hold the same beliefs as SAJ, I can respect the man for speaking what he believes, because what he does believe isn't rooted in pop culture and is a genuine personal belief. He sits outside the theological belief bandwagon that many other metal bands are drawn by. I often wonder how many of those bands really believe what they speak of or are simply doing it because it is cool. Anyway, I'll save that discussion for another time.

For the more open minded listeners out there, this is something worth checking out regardless of your theological persuasions. It is never a bad thing to listen to the perspectives of others who may not hold the same beliefs as you, especially when they are expressed due to a strong, genuine belief, not because it is the in thing to do.