Deaf To Our Prayers 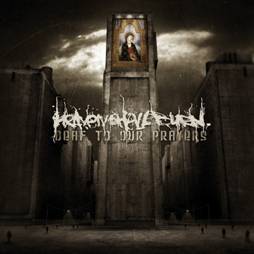 Having fully entrenched themselves as a major player within the melodic death metal/metalcore scene with their third release Antigone in 2004, German based act Heaven Shall Burn have a lot to live up to with their fourth length effort Deaf To Our Prayers, and for the most part, their just manage to scrape by. Apart from a small change within the line-up (Guitarist Alexander Dietz replaced Patrick Schleitzer, and joins the established line-up of vocalist Marcus Bischoff, guitarist Maik Weichert, bassist Eric Bischoff and drummer Matthias Voigt), the only real notable change in Heaven Shall Burn's sound from two years ago is the absence of any of the atmospheric instrumentals that appeared on Antigone, and a far stronger production and mix sound, which only reinforces the band's concerted effort to give their all from the word go.

The opening cut Counterweight is nothing short of pure devastation from the word go, with Bischoff's vocals sound more abrasive than ever, while the dynamics between the heavy weight guitar riffs and pummelling drumming is expertly mixed by renown studio extraordinaire Jacob Hansen to ensure maximum effect. While there was a touch of the melodic within the opening track, it's with Trespassing The Shores Of Your World that the band truly reveal their none too subtle future direction, with the track going straight for the throat in the aggression stakes, and refusing to let go until the very end (Apart from the subtle use of keyboards around the half way mark).

Around the middle of the album, on tracks such as The Final March, Profane Believers, Of No Avail and Stay The Course, Heaven Shall Burn utilise some heavyweight groove to their advantage with plenty of melodic appeal, while a song such as Armia does show a slight change of pace, allowing the guitarists to demonstrate a greater atmospheric and layered feel to their playing, which is nicely balanced out with the piano piece that closes out the track. mybestfriends.com (A savage attack based around the Internet), Biogenesis (Undo Creation) and the stripped back Dying In Silence are full of vitriol and savage aggression, which leaves the far more experimental The Greatest Gift Of God (Which features huge gang like backing vocals, which is presented like a repetitive chant over and over again) to finish up the album.

Although the changes are slight, Deaf To Our Prayers is none the less enough of a change to ensure that Heaven Shall Burn remain relevant within the scene, and show enough progression to rise above the highly acclaimed Antigone amongst their hardcore following.

More from Heaven Shall Burn