With Oden On Our Side 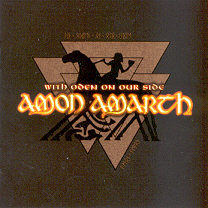 A return to form of the strongest kind

Steadfastly sticking to what has worked in the past, Swedish melodic death metal act Amon Amarth have once again returned with their sixth full length effort With Oden On Our Side, which is sure to only build upon the considerable fan base they had gathered up to 2004's Fate Of Norns (And their extraordinary three D.V.D. package Wrath Of The Norsemen released earlier in the year). Although little has changed on With Oden On Our Side in the way of the lyrical premise (All of the band's prior works, including their latest album, are centred around tales of Viking conquering and Norse mythology), what does separates Amon Amarth's With Oden On Our Side from previous efforts is the full production sound, with Jens Bogren (Who produced, mixed and engineered the album) adding far more depth and heaviness to the Swedish combo's particular brand of melodic battle metal, which inevitability equates to what is easily their strongest release since 2002's Versus The World.

The opening assault of Valhall Awaits Me is a classic Amon Amarth opener with guitarists Olavi Mikkonen and Johan Söderberg providing plenty of melodic lead breaks in amongst Ted Lundström's (Bass) and Fredrik Andersson (Drums) crashing tight rhythm sound, while vocalist Johan Hegg is as strong as ever with his melodic (Yet decipherable) growled delivery. The huge groove evident in Runes To My Memory and the fast paced Asator represent familiar old school Amon Amarth styles with plenty of dual guitar work helping create a mass of sound, while on Hermod's Ride To Hel - Lokes Treachery Part 1, Prediction Of Warfare and Under The Northern Star, Amon Amarth explore their more atmospheric/melodic side, all the while retaining their known strengths. On the heavier and the more crushing side of things, tracks such as Cry Of The Black Birds (After the initial build up), Gods Of War Arise and the title track With Oden On Our Side more than deliver in an aggressive and powerful manner.

Six albums in, and Amon Amarth have yet to falter in their journey onward. And while some may have considered Fate Of Norns a somewhat weaker album from the Swedes, one listen to With Oden On Our Side and its stronger production and well thought out/diverse song structures will win back any fan in no time at all.